Dan Hoyle is the type of comedian you want to get to know. His style of comedy is what he likes to call journalistic theater. It is an artistic foray into storytelling that brings a people and a place to life through real research and human connections. With an uncanny ability to master accents and markers of race and class, Dan compassionately and respectfully brings to light the assumptions that curate the ideological divide on an international scale.

Dan's show The Real Americans is a brilliant and hilarious story based on his three-month trip through small town America. He characterizes the people he met, young to old, North to South, black to white, with dramatic distinctions. It is through his performances that he tactfully unveils how diverse America truly is. In his show Each and Everything, Dan remarkably brings us to question the importance of human connection during the height of technological dependence. Sound advice from his good friend Pratim leads Dan on an epic journey to a coffee house in Calcutta, India, and it is there that he discovers what real, true, and meaningful conversation and connection is.

When asked if he has a story to tell, it is quite clear that Dan does not have some profound life altering advice and does not demand that one live their life in a certain way. The political controversies and pop culture dramatizations expose fragile and raw emotion, and it's from these feelings that Dan hopes he can hearten some form of connection between people and place: "I want to encourage a way of thinking that is critical. We live in a world that is curious. Expand that curiosity and really seek to connect with other people and cultures." 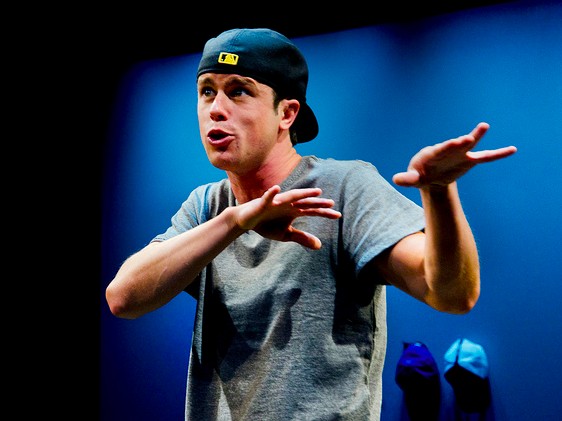 One could argue that acting is in Dan's blood. His father Geoff Hoyle is a multifaceted actor, solo performer, and Pickle Family Circus clown. While attending Waldorf for his early years, Dan was always engaged in some form of role play or stage production.

He remembers his first real acting role as the lead in Noah's Ark. He rehearsed his lines over and over again and yet still needed help from his teacher to remember his lines. While reflecting on those early days on stage, he remarks, "This is the thing about Waldorf education. It encourages imagination, courage, and empathy, all of which are the foundations of any character."

Growing up in San Francisco, Dan says, helped to build his social awareness and helped him grow as a person: "Riding the bus to school, walking around the city streets, I had more diverse interactions with people and I was learning every day. It was important for me to have the Waldorf educational experience to encourage my imagination, and it was important for me to expose myself to the harshness and rawness of the city."
The respectful and curious approach to sparking conversations with strangers is where all of Dan's stories begin. Theater and acting allows Dan to make an experience as intense and compelling for the audience as it was for him experiencing it.

His diverse experiences include a month as an artist-in-residence at Trinity College in Ireland and a year in Nigeria as a Fulbright Scholar. Dan is currently performing at The Marsh with his latest creation Border People, a performance that exposes the geographic, cultural, emotional, religious, and racial borders that segment American culture today and the profound courage and commitment it takes to live on one. The show runs through October 26, 2019. ~

For more on Dan Hoyle and his upcoming shows, visit his website at www.danhoyle.com.

Service in the political sphere