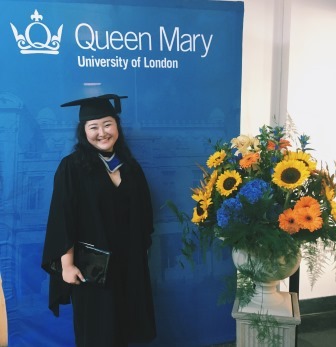 I graduated from San Francisco Waldorf High School in 2012, and am a so-called 'lifer' - after attending a Waldorf preschool in Marin where I grew up, I attended Monique Grund's kindergarten class before beginning first grade with Mr. Weber as my grade school teacher and continuing on to the high school.

After graduating from SFWHS, I moved to Europe to start my undergraduate degree in Liberal Arts at University College Dublin (UCD), in Dublin, Ireland. After two years at UCD focussing my studies in politics, international relations and sociology (including a semester spent at the University of Auckland in Auckland, New Zealand), I moved again to London, UK, and transferred to the Department of Politics and International Relations at Queen Mary, University of London (QMUL). I graduated from QMUL with a Bachelor of Arts in International Relations with First Class Honours in 2016. I have recently completed a Masters degree in Conflict Studies at the London School of Economics and Political Science, from which I will have graduated (in December 2017) by the time this newsletter is published.

Presently, I am in that 'what's next' stage of my personal and professional development. I am currently taking a gap year to travel, and am applying for PhD positions - in London and elsewhere in the UK - to start in September 2018. It was during my Bachelor's degree, particularly at QMUL, that my interest in International Relations was cemented. I was lucky to have lecturers and mentors there who were not only passionate in their teaching and research, but actively encouraged me and other students to continuously question and critically engage with the world politically. As a cumulation, my undergraduate dissertation on the post-Second World War American Occupation of Japan was awarded the Northedge Essay Prize from leading international studies journal, Millennium.

The inspiration to study the subject at university came from my high school experience - in retrospect, I am awed at the extent to which I was able to engage with the world both around me and further afield from such a young age. What strikes me about my humanities classes across my time at SFWHS is how what we would be reading and learning - whether it was about the Chinese Cultural Revolution, 19th century Russian literature, African colonization or the American Civil War - were taught in their relevance for my and my friends' lives there and then. I was lucky enough to be part of the Eurythmy Troupe and experience different cultures through that (we went to China, New Zealand, and after high school I spent the summer in Germany doing Eurythmy!), but it was probably my involvement with the Model UN club, and taking the Current Affairs elective class in Senior year which not only made me want to study politics but to do it abroad as well.

I consider myself incredibly fortunate to have been in Mr. Weber's class - not only because he was with us for all eight years at SFWS and continued to teach in high school, but also because of the warmth of environment he created for his students, and the passion with which he taught us from childhood through adolescence. In grade school, he inspired and instilled in me and my classmates a love of learning in all aspects of the word, and a wonder at the working of the world around us - these are both things I carry with me. In high school, he, along with others like Ms. Caldarera, Mr. Wong, Ms. Lacy, and Ms. Alba, taught me to engage critically and in depth with the world around me, as well as encouraging me to have wide-ranging interests - and for this, I will be forever grateful.

This twin insight is what I would like to pass on to current students: to think and engage deeply with the world around you, but it is ok, and beautiful, to have an array of interests as well. I did have a bit of a culture shock when I began university - however it was a shock that only made me more resilient, and, realize that this community will always welcome you home.

2019 UPDATE: Having graduated from the London School of Economics and Political Science with a Masters in Conflict Studies, Karin is currently pursuing her PhD in Political Science at Queen Mary, University of London. Her research is on the rise of the conservative right and its political philosophies, with a particular focus on Japan in a global context.